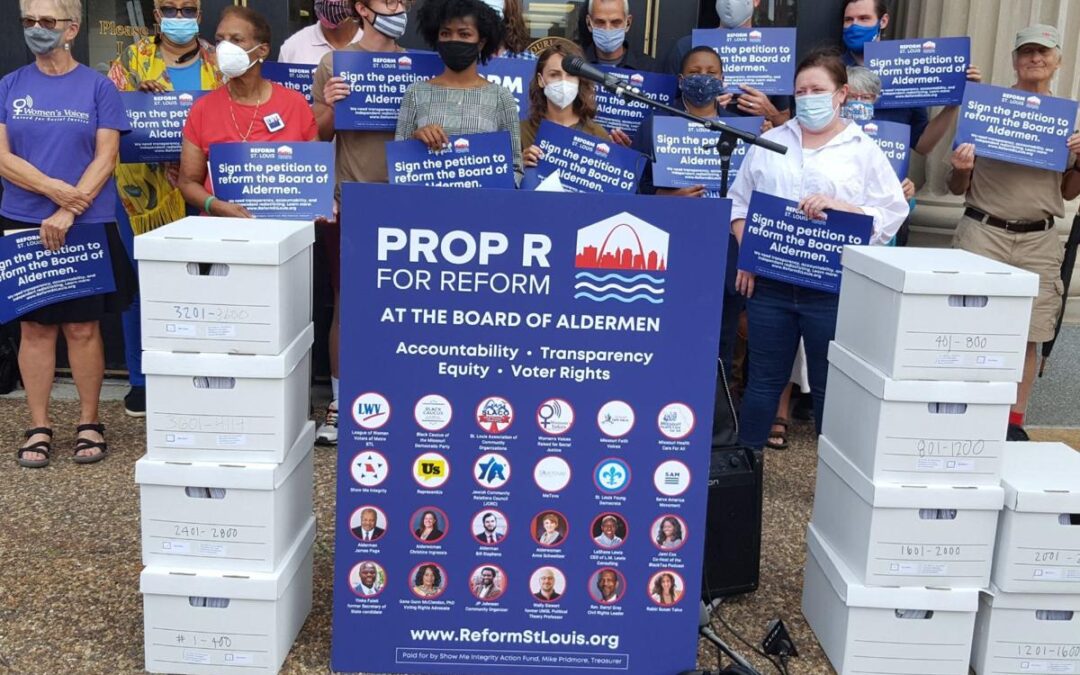 ST. LOUIS — Petitioners on Monday submitted signatures aimed at yanking away the job of redrawing ward boundary lines from the Board of Aldermen, spurring two board members to accuse them of trying to engineer a progressive takeover of city government.

The petition group, Reform St. Louis, wants to force a special election next February on their proposed city charter amendment to shift redistricting authority to a new independent commission.

“The people get to pick their alderpersons and not the other way around” under the proposal, said Reform St. Louis member Yinka Faleti at a news conference outside the city Election Board office downtown.

Faleti, the unsuccessful Democratic nominee for Missouri secretary of state last year, was among speakers at the event, after which nearly 39,000 signatures of registered voters were turned in.

Election officials say more than 30,000 are needed to trigger a special election on the issue.

Among other speakers were Aldermen Christine Ingrassia and Bill Stephens of the 6th and 12th wards, both in the board’s progressive faction.

Two other aldermen are listed on Reform St. Louis campaign materials as endorsers but didn’t attend. They are Anne Schweitzer, a progressive from the 13th Ward, and James Page, a self-described moderate who won election in the 5th Ward earlier this year with some progressive support.

Accusing the group of trying to aid a progressive takeover were Aldermen Jeffrey Boyd of the 22nd Ward and Joe Vaccaro of the 23rd, both considered more centrist.

Mayor Tishaura O. Jones, a progressive, won the top race run under the new system. She hasn’t taken a position on the redistricting petition proposal.

“This is … an activist group of people who want to have it their way,” Boyd said. “They don’t listen to people. They have their own ideologies.”

Vaccaro predicted that the commission envisioned by the petitioners, if OK’d by voters, would “try to figure a way to make sure the progressives are drawn into wards” to allow them to win control of the board in later elections.

Benjamin Singer, an organizer of the petition effort, denied that the 9-member commission would be stacked to aid progressives and noted that the process would start with the random selection of four people from an overall pool of applicants.

The random picks would be made by a Board of Aldermen-named oversight board made up of three retired judges and two city officials. Those four commissioners would then pick the five others from the pool.

A goal, the proposition says, is to reflect city demographics by geography, race, age, gender, sexual orientation, ability and ethnicity.

“This is about transparent accountable representative government and putting the people in charge,” said Singer, a former spokesman for Jones when she was city treasurer.

He acknowledged that there is some overlap between supporters of last year’s Proposition D and those backing the current proposal.

Meanwhile, Charles Chatman, who said he often manned a signature-gathering table outside a Schnucks store at the Hampton Village shopping center, has complained that Vaccaro harassed him on three occasions over the last month.

Chatman, a deacon at Saints Fellowship Mission on North Skinker Parkway, said Vaccaro each time interfered with passersby considering signing and said things such as “why are you lying to the people?”

Vaccaro denied harassing Chatman. “I was simply asking people to read what they’re signing,” he said.

Redistricting, in addition to reflecting population shifts reported by last year’s census, also must cut the 28 wards in half as required by a charter amendment passed by voters in 2012.

Other speakers at the petition group’s news conference included Joan Hubbard, a board member for the League of Women Voters of Metro St. Louis.

She said the local league backs the proposition because “these boundaries should always be based on neighborhoods and common interest, not political clout.”

Kevin McKinney, executive director of the St. Louis Association of Community Organizations, said that group backs the plan because it doesn’t want any neighborhoods split among wards.

The proposition requires wards to be designed to “minimize the division of” neighborhoods and any “local community of interest.”

However, limiting the splitting of neighborhoods also is a stated goal of Alderman Joe Vollmer, the chairman of the aldermanic Legislation Committee in charge of the board’s own redistricting process.

Vollmer, of the 10th Ward, said Monday his committee would have an initial meeting as soon as next week and likely would poll the 28 current aldermen on what they feel “the strongest neighborhoods” are in their respective areas.

The petition proposal, in addition to revamping the redistricting process, would make some other changes.

One provision requires aldermen with a conflict of interest on pending legislation to refrain from voting instead of just disclosing the conflict.